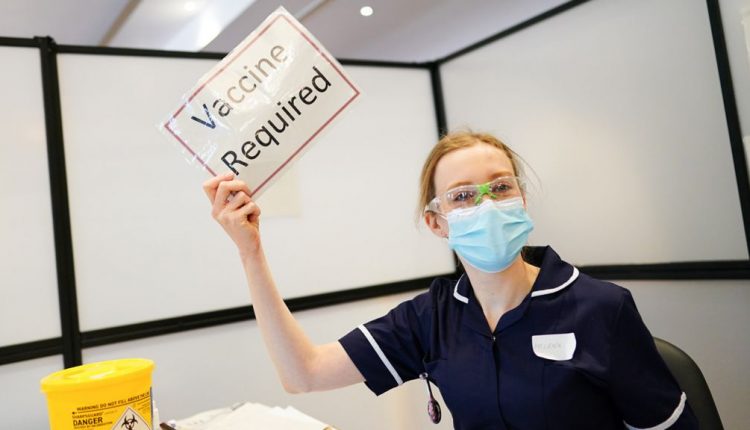 Covid: How effective is the vaccine and do I need a booster?

Being double vaccinated offers the best protection against the Delta variant, first identified in India and now dominant in the UK, according to a new study.

But people who have had both doses can still catch and transmit the disease, so researchers say it is essential that as many people are possible get the jab.

Everyone aged 16 and over in the UK can now receive the Covid vaccine, and a third jab is expected to be rolled out for the most vulnerable from September.

“How soon should I get my second jab?”

Who’s being vaccinated at the moment?

The JCVI – the scientific body advising the government on vaccines – says one dose of the Covid vaccine should be offered to everyone aged 16 and over. At the moment, 16-17-year olds are not expected to be offered a second dose.

The vaccine has already been approved for over-12s with underlying conditions or those who live with others at high risk, but there are no plans to give it routinely to this age group.

An estimated 89% of adults in the UK have now had at least one Covid jab, and around 77% of adults have had both doses, but many people under 30 are yet to receive theirs.

An estimated third of 18-29-year-olds in England have still not had a single jab. In Scotland, the figure is about 25%.

In recent weeks, there’s also been an appeal for more pregnant women to come forward for the vaccine, after reports than fewer than one in 10 in England has received their first jab.

How do I get a vaccine?

In England adults and those within three months of turning 18 can book a jab either online or by calling 119. You can also visit a walk-in clinic without an appointment. Check your local health providers and social media groups for details.

All 16 and 17-year-olds are being invited by text or letter to make an appointment through their GP, or they may be able to go to a walk-in centre in their area.

In Scotland, everyone aged 16 and over can register to get the vaccine on the NHS inform website or by calling 0800 030 8013. Most health boards also have drop-in vaccination clinics.

In Wales, adults should contact their local health board if they have not already been offered a jab. Invites are being sent out to 16 and 17-year-olds.

How soon should I get my second jab?

In England, the recommended gap between first and second jabs is between 8-12 weeks.

In Scotland the recommended gap is eight weeks between jabs.

In Northern Ireland, the interval is eight weeks.

In Wales, the government says you should be called in for your second dose “within 12 weeks” of the first.

What’s the latest on booster jabs?

Millions of people most vulnerable to Covid-19 may be offered a third vaccination – along with the annual flu jab – from September.

Health Secretary Sajid Javid said he was waiting for “final advice” from the JCVI before proceeding.

In an interim report, it said any booster programme should include the over-70s, the clinically extremely vulnerable and frontline health and social care workers.

And it suggested it would make sense for a Covid booster to be offered alongside the flu jab to adults aged 50 and over, and people aged 16-49 years in at-risk groups.

What vaccine will I get?

The UK is using vaccines made by Pfizer-BioNtech, Oxford-AstraZeneca, and Moderna.

People under 40 or pregnant are being offered Pfizer or Moderna rather than Oxford-AstraZeneca because of concerns about a possible connection with extremely rare cases of blood clots.

Do vaccines work against different variants?

The most common type of Covid currently in the UK is what’s known as the Delta variant, first identified in India.

According to the largest study of its kind, having two doses of Covid vaccine remains the best way to protect yourself against the Delta variant

After four or five months, the study suggests you have the same amount of protection whether you had AstraZeneca or Pfizer.

Neither is as effective against Delta as they are against the Alpha variant, which was responsible for most UK infections last winter.

Researchers don’t yet have enough data to compare the Moderna jab, but believe it is “almost certainly at least as good as the others”.

Not for most people, although the government is urging everyone who can have the vaccine to get it.

Vaccinations will be compulsory for staff at care homes in England, and may be extended to include more NHS staff.

Some private companies have also said their staff must be vaccinated.

Being fully vaccinated means that you don’t have to self-isolate after visiting amber list countries.

Fully vaccinated people across the UK also no longer have to self-isolate if a contact tests positive for Covid (as long as they themselves test negative).

By the end of September, full vaccination will also be a condition of entry for getting into nightclubs and some other venues in England.

What is the advice to pregnant women now?

The Delta variant is causing more serious illness from Covid which means unvaccinated pregnant women and their babies are at risk.

In the last three months alone, 171 pregnant women with Covid needed hospital care. Data has shown that none of them had had both jabs.

More than 55,000 pregnant women across the UK have received at least one dose of the vaccine, with no safety concerns, says NHS England.

What about people with allergies?

A very small number of people have experienced a severe allergic reaction after the Pfizer vaccine.

You should discuss any serious allergies with your healthcare professional before being vaccinated.

Most people will not be affected in any way, although side-effects with all vaccines are possible.

The most common ones include a sore arm, headache, chills, fatigue and nausea.

They are part of the body’s normal immune response to vaccines and tend to resolve within a day or two.

What are the rules and guidance for face masks and coverings?