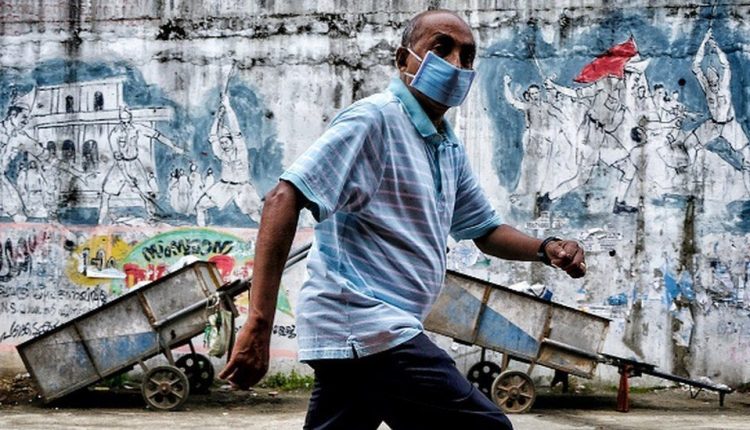 Covid-19: The mystery of rising infections in India’s Kerala

The southern Indian state of Kerala accounts for more than half of the country’s new Covid-19 infections. The BBC’s Soutik Biswas and Vikas Pandey report on why cases continue to rise in the state, months after the waning of the deadly second wave.

In January 2020, Kerala reported India’s first Covid-19 case in a medical student who returned from Wuhan, in China, where the pandemic began.

The number of cases rose steadily and it became a hotspot. By March, however, half a dozen states were reporting more cases than the picturesque southern state.

Sticking faithfully to the contagion control playbook of test, trace and isolate and involving grassroots networks, Kerala brought down its case count drastically. There were breathless stories about the state flattening the curve. The first wave was protracted, but Kerala managed to control the spread of infection. The official death count remained low.

“If there is one thing which we should have learnt from India’s pandemic by now, it is to treat narratives of exceptionalism with caution,”

Infections rose faster during the deadly second wave this summer. And they show no signs of abating even as the pandemic wanes in other parts of the country.

With barely 3% of India’s population, Kerala has been accounting for more than half of India’s new cases.

The reproduction number of the virus – which explains a disease’s ability to spread and estimates the number of people infected by one already infected person – has crossed one.

This indicates a growing number of cases which, in turn, require lockdowns and other measures to stem a tide of infections.

The percentage of people who test positive for the virus from the overall numbers being tested has hovered above 10% for a month. Kerala has recorded 3.4 million infections and 16,837 deaths from Covid-19 so far.

But these disturbing numbers don’t tell you the whole story, say epidemiologists.

Kerala, they say, is testing a lot more people – more than double the people per million compared to the rest of the country. It has kept infection levels in control.

The state is capturing one out of every two infections compared to other states which are catching one out of 30-odd infections. “Kerala is testing more, and testing smarter. By tracing contacts to find out real cases, testing is also better targeted,” says Dr Gagandeep Kang, one of India’s top virologists.

The latest antibody tests survey reveals that only 43% people above the age of six in Kerala have been exposed to the infection, compared to 68% nationwide.

This, many believe, proves that Kerala has done an admirable job in controlling the spread of coronavirus unlike the rest of India.

Also, despite the rising number of cases, hospitals have not been overwhelmed. Kerala’s case fatality rate is a third of India’s national estimate; half of the Covid-19 beds in hospitals are free; and under-reporting of Covid-19 deaths is possibly the lowest in the state, according to a report.

Also, Kerala has fully vaccinated more than 20% of its people and 38% – including 70% of people over 45 years – have received a single jab, much higher than the national average.

So the state appears to be testing widely, reporting cases honestly, vaccinating quickly and ensuring that hospitals are not overwhelmed. Future waves of infection will not be “as severe as the second wave, given the pace at which Kerala is vaccinating its population”, reckons Dr Rijo M John, a health economist.

Yet, epidemiologists worry that Kerala’s apparent success does not tell us the whole story.

For one, a large number of people remain susceptible to the virus. “This is likely to be driving the pandemic in the state now,” says Prof Gautam Menon, a disease modelling expert.

There is also risk in “letting people get infected, even while preventing deaths”, says virologist Dr Shahid Jameel.

And that risk is of long Covid – long-term problems after recovering from the original infection – which afflicts up to a third of those infected, including asymptomatic patients.

Kerala is at an “early [stage] in runaway exponential growth” in infections, believes Dr Swapneil Parikh, a physician. The highly infectious Delta variant has a much higher viral load and spreads faster, making it difficult to stamp out the infection, he says.

“The hospitalisations and deaths now represent infections from sometime before, so I would not necessarily take solace in the fact that they are low right now,” says Dr Parikh. The consistently high test positive rate of infections is “still a cause for worry”.

Prof Menon says a prolonged pandemic could mean the possibility of more mutations of the virus, leading to the emergence of new and dangerous variants which could spread the disease to the unvaccinated and uninfected people. “This is a time for caution. Kerala’s main focus should be to bring down case numbers.”

Many say Kerala needs to be wiser and more forceful while enforcing rolling lockdowns – the state has allowed festivals to go ahead, leading to mass gatherings and risks of increased infections. Virologists say Kerala also requires a more granular data on targeted testing and increased genome sequencing to find out where the infections are rising the most and to track new variants.

“If there is one thing which we should have learnt from India’s pandemic by now, it is to treat narratives of exceptionalism with caution,” says Dr Murad Banaji, a mathematician at London’s Middlesex University, who has been tracking the pandemic closely. Clearly, Kerala might not turn out to be an exception.

Assisted dying: Campaigners renewed hope for change in the law