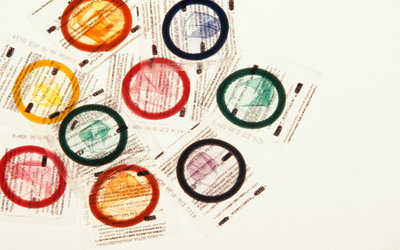 We use them all the time and schools teach us how to put them on correctly. But what we know to be the condom now isn’t always the form it’s taken. Condoms were considered to be a contraceptive underdog in the ‘70s. During WW2, military leaders used them in an attempt to curb venereal diseases, with marketing slogans such as ‘put it on before you put it in’, and saw an increase in popularity amongst soldiers. But in the ‘60s, after the birth of the pill, condoms went down in popularity. But it all changed in the ‘80s. The AIDS threat saw condoms skyrocket back into the spotlight and people began using them more to prevent HIV and other STDs. They were praised for safer sex yet criticised as an enabler of immoral behaviour – they were on both the good and bad list of sexual activity. This wasn’t the first time condoms had been in the spotlight though. In the 1500s, they were used to stave off disease and protect sailors from syphilis. The foil-wrapped condoms we know today are a world away from the sheaths that sailors of the 1500s used, but the process was very much the same.

It’s common knowledge now that babies occur when sperm fertilises the egg in a woman, but the concept is relatively new in terms of the variety of research that’s taken place over the past few centuries. However, the basic contributions from a man and a woman that make a baby is an idea we’ve known for a lot longer. As such, barrier methods have also been around for a long time. There are many historical depictions of penile sheaths, but whether they were used as prophylactics is another question. The Roman Empire was the first time in which condoms were documented properly, and the first documented ones were made from linen and had a drawstring-like ribbon which held the condom on during sex. By the mid-1700s they were beginning to be made from animal membranes which were still tied with a ribbon. They were often expensive and usually full of holes. In fact, this is where Casanova’s famous trick of inflating them with air to check their security came from. Their reliability was suspect, much like their rubber neighbours, and they were considered to be reusable.

In 1839, when vulcanisation was discovered, rubber took its place in the contraceptive industry. However, in the early days, buying a rubber condoms wasn’t like buying a condom at the local pharmacy as it is today. Men often had to visit their GPs to be professionally fitted for a condom, and some of the earliest forms only covered the tip of the penis. They were invariably marketed as being reusable or wash-and-wear prophylactics. Especially when used with oil-based lubricants, they had quite a short shelf life. In 1919, Frederick Killian took a step away from rubber and opted for liquid latex – this led to the thinner, cheaper condoms we know today. Companies were soon mass-producing these new condoms which had a longer shelf life. The condoms we use today are made from latex and make up more than 99 per cent of condom sales worldwide. They are used by millions of people as a way of protecting against unwanted pregnancies and to prevent the spread of sexually transmitted diseases, and are still one of the cheapest and more effective forms of contraception on the market.

How Do You Ensure Your Prostate Is Healthy?