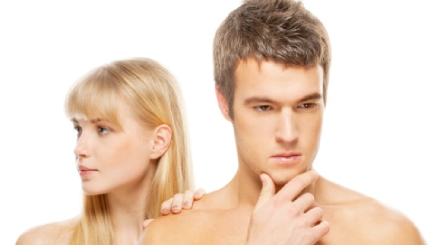 As a woman, you hear a lot about hormones. From the time you’re told about puberty to until well-after menopause, you’re bombarded with sexual health information and more-than-a-few PMS jokes. Your manlier counterpart, on the other hand, is often squarely in the dark about his hormonal wellness, not knowing a thing about what his own chemical compounds are doing – or not doing – while coursing through his veins. In fact, hormones affect male and female wellbeing in much the same way – with, in some cases, oestrogen and testosterone compounds being set apart by a single atom. The truth is that men are just as affected by hormones as you are, and there are a lot of benefits in keeping male hormones in the proper balance.

1. Balance is vital: While testosterone plays an important role in your man’s health, it’s only one of several hormones in the mix. Men’s hormone levels change from hour to hour, fuelling a complex endocrine system that sends signals to organs throughout the body. When these hormones become unbalanced or start to decline (which happens roughly by the time your man reaches 40), his body begins to store excess fat and prompts him to eat when he isn’t really hungry. Aside from weight gain – which I’m sure neither of you want – this hormonal imbalance could lead to a slippery slope towards metabolic syndromes, such as diabetes. You man will also be less able to fight stress, and consequently be more tired, anxious, irritable and less interested in sex.

2. You can’t always blame testosterone: You often use testosterone as a marker for aggression or strength, but the truth is that testosterone doesn’t really work in this way. If your man has a lot of road rage, you can’t start blaming his hormones. However, if a screaming match does progress into fisticuffs, his testosterone will affect the size and strength of his muscle and bone, which could be handy. Another thing in which testosterone is a prime player is in sexual appetite and sperm production, as well as enabling your man to grow a beard or moustache. Interestingly, testosterone can even impact the way your man feels about technology. This is according to researchers at the University of Bath, who have found that pre-natal testosterone exposure affects the way a man’s brain develops and, later in life, this allows grey matter an easier grasp of new technology. However, too much testosterone can cause acne, male-pattern baldness, high cholesterol levels and liver disease.

3. It’s not just for men: Yes, we’re talking about men’s hormones here, but women also have a natural production of testosterone. This hormone plays a key role in the functioning of your ovaries, as well as boosting your bone strength, elevating your mood and even stimulating your sexual appetite. However, too much testosterone in your system can cause you to experience acne, irregular periods, hair in unusual places, weight gain and acanthosis nigricans, a condition in which patches of dark skin appear on the back of your neck and/or in other areas.

4. His thyroid hormone declines with age: While a whole host of hormones can impact on your man’s emotional and physical wellbeing, his thyroid hormone becomes less reliable after the age of 60, which has been linked to sexual dysfunction. Low thyroid can lead to erectile dysfunction (which is the inability to maintain penile erection), as well as declining sexual desire, weight gain, hair loss, memory loss, constipation and rough, dry skin. Fortunately, there’s good news; synthetic hormone replacement can usually help these symptoms – including erectile dysfunction caused by hypothyroidism – to reverse themselves.

How Do You Ensure Your Prostate Is Healthy?