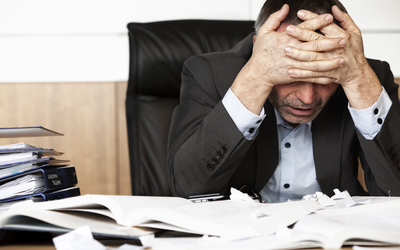 Is Your Job Sending You to an Early Grave?

Of all the things that affect corporate wellness, and your overall well-being, occupational stress is the worst, and the most common. We accept it as a part of life, but workplace stress is not only taking its toll on your emotions, but also your wellness. There are a number of chronic health conditions linked to stress, and some in particular that are related to on-the-job strain, so what might your high-octane career do to you?

Diabetes – In 2012, a study published in the Journal of Occupational Medicine, found that women who have stressful jobs are at an increased risk of developing diabetes. Fortunately for the fellas, the researchers did not find the same effect in men – I guess that glass ceiling is lined with sugar.

Heart attacks – When researchers at University College London undertook a review of studies in 2012, they discovered that those who have high-pressure jobs are 23% more likely to have a heart attack than those who don’t have stressful jobs, if such jobs exist.

Depression – A 2011 PLOS ONE study noted that, if you work more than 11 hours a day, you’re twice as likely to suffer from a major episode of depression as those lucky people who work more regular hours. Seeing as depression can also lead to a shorter life expectancy, increased risk of stroke and heart attack, disrupted sleep and addiction, it might be wise to start knocking off at 5.30pm.

Accelerated ageing – Not only is job stress causing a few extra frown lines here and there, it’s actually ageing you prematurely. Recent evidence has shown that people who have the most workplace stress have the shortest telomeres. There are the sections of DNA that are linked to longevity.

Higher risk of death – Researchers at Tel Aviv University conducted a 20-year study in which they discovered that, if you work in a hostile office environment, you have a significantly increased risk of death than those who work in calmer, happier places. The next time you complain that your job is killing you, at least you can be safe in the knowledge that you’re not actually being over-dramatic.

How to Set the Course for Your Personal Weight Loss Journey

Try Yoga For the Glowing Skin You Dream of Having Forever!