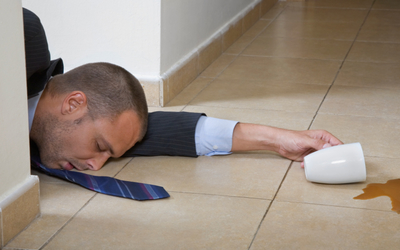 Could Your Office be Putting You at Risk of a Heart Attack?

Corporate environments are more stressful than ever before. The modern world is fast paced and cut throat, and that kind of ongoing stress can have a strong negative effect on your wellness and wellbeing.

A team of management researchers and professors in the medical field have now found an official correlation between getting stressed and burned out at work and coronary heart disease (CHD).

The researchers found that those who appeared I the top 20 percent of a so-called burnout scale had a whopping 79 percent increase in their risk of getting coronary disease. The results of the study were published in Psychosomatic Medicine and were described as ‘alarming’ as they suggest that burning out at work through stress can be a strong predictor of coronary heart disease – and shockingly, an even bigger predictor than any other conventional risk factor such as smoking, low physical activity or the blood lipid (fat levels) of an individual.

Burnout has already been associated with other risks to the heart, such as high cholesterol or fat in the human bloodstream. That is why the researchers set about testing the idea that stress could have an associated impact on coronary heart disease, and they used a group of 8,838 hardworking and apparently healthy men and women aged between 19 and 67. The individuals were given routine examinations at regular intervals for around three and a half years. Each participants was assessed for levels of burnout, and were also checked for signs of coronary heart disease. Factors such as gender, family history of the disease, smoking and age were assessed and controlled so that they did not sway the overall results. The results showed quite conclusively that there is a very strong link between stress in the workplace, burnout and associated levels of coronary heart disease.

Intermittent Dieting: Weight Loss that Breaks All the Rules

How to Give Your Wellbeing a Cheeky Boost

Try Yoga For the Glowing Skin You Dream of Having Forever!