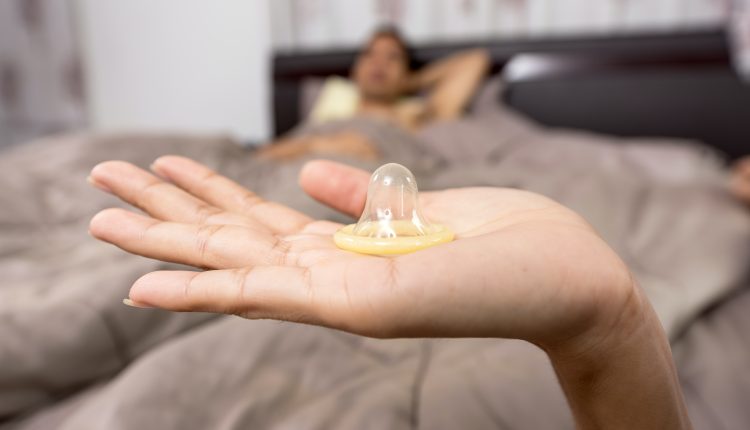 Common Condom Mishaps You Could Be Making

Condoms are a popular contraceptive as they are cheap, effective and easy to buy. They’re also the only way to protect against sexually transmitted diseases. But it seems that the male condom is only effective 94 per cent of the time, when used properly, at protecting against HIV and other STIs, and 98 per cent against unwanted pregnancy. If condoms are not used consistently and properly, this rate immediately drops. While consistently is easy enough to manage, it seems that ‘properly’ is less easy – many people get this wrong. They ought to be foolproof given their ease of use, but you would be surprised how many people don’t use them in the right way. Here are the most common mistakes people make that could be putting their health at risk or increasing the chance of conception.

Getting the wrong size

While it may be an ego-boost to have an extra large pack of rubbers on your bedside table, getting the wrong size could put you at risk in more ways than one. Firstly, friction can occur when you’ve picked a big condom that doesn’t fit but blisters aren’t the problem here. Friction can cause the condom to rip, and that leads to leaks. Worst of all, when a condom is too big, it can come off completely during sex. Beyond simply awkward, it leads to you having protected sex to unprotected in seconds. Latex condoms are stretchy and should be a snug fit, so for most people standard sizes are the best choice.

Using a wallet as a condom storage unit

For most men, using a wallet as an emergency condom storage is the easiest choice. But walking around with a wallet full of condoms isn’t the smartest idea, particularly if they are in your back pocket as they’ll be susceptible to friction, heat and pressure. None of these are the best home to latex, as it makes them weaker. The same rule applies when it comes to glove compartments, or anywhere else that’s subject to extreme temperatures. You need to store condoms in a cool, dry place in order for them to be at their best.

Using condoms that are out of date

Best before dates don’t just apply to food – condoms expire and after that date, they’re no longer effective. Old latex becomes brittle which makes it easier to split and rip, and the spermicide it is coated in will also be ineffective. Firstly, check the date on the packet and stick to it, and if the condom itself is brittle and dried out, get rid of it.

Opening a condom with you teeth

It may look cool but opening a condom with your teeth puts you at risk of damaging it and ripping the delicate latex. Even if it’s not visibly punctured, a bitten condom could still be damaged enough to break. Beyond that, lube tastes revolting and isn’t something you want in your mouth! Likewise, don’t look to scissors or knives to open the packaging. The serrated edges make the packaging very easy to get into with just your hands, so there is no need to use any sharp implements.

Putting it on wrong The classic reason why condoms fail is that they haven’t been put on properly. The most common reasons are putting them on inside out, flipping it inside out and using it again, picking a condom that’s too tight or too big, or only partially unrolling it. It’s important that you get a condom that fits properly, and that you squeeze the excess air out before you begin having sex. Roll it fully along the shaft of the penis and ensure that it is in date.

Puberty Blues: How to Deal with Your Body’s Changes

Facing the Risks: Should You Reconsider That Face-Lift?