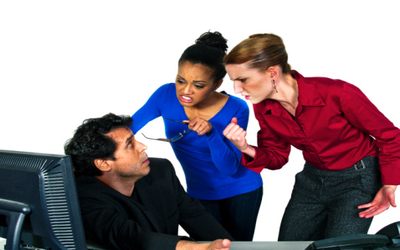 Pigtail-Pulling in Power Suits: The Rise of the Office Bully

You’d think, at a certain age, having to deal with bullies is far behind you. However, the modern workplace proves that, sadly, this is not the case. The office bully can hinder corporate wellness, as well as your personal sense of wellbeing. Not only are you unhappy and stressed whenever the office bully is around, but a hostile working environment also hampers your productivity, which has disastrous effects for your company. Therefore, making sure everyone gets along is a worthy goal for anyone to take on.

“Workplace bullying” is a pretty broad term but it basically means a repeated, wellness-damaging mistreatment of one or more people. This encompasses all negative behaviour, such as verbal abuse, offensive nonverbal behaviours, or purposefully interfering with your ability to get your work done. It sounds like a simple problem to stamp out, but more and more people are reporting being the victim of workplace bullying. In 1998, 25% of those survey revealed that they were treated rudely once a week. However, this rose to 50% in 2011, and recent evidence has also come to light which suggests you’re now more likely to be bullied in the office if you’re unattractive.

It’s becoming glaringly obvious that workplace bullying is a problem. Many victims of an office bully have reported developing health issues such as anxiety and depression, while some have even had to leave a job to escape a negative working environment. But why has the situation become so dire? Some experts blame the recession, as this may have put so much undue pressure on your boss that he or she is taking it out on you. It may be the case that it’s just a natural personality thing, as many workplace bullies score high on tests of narcissism and self-orientation.

However, Dr. Christine Porath, a Georgetown University professor who studies workplace incivility, points out that you can become so overwhelmed by your work responsibilities that you don’t even realize when you’re being rude to others. While the cause of workplace bullying remains to be determined, Greatist expert and psychologist Dr. Michael Mantell, who helps train managers in workplace harassment prevention, says that recent research on workplace bullying has paved the way for efforts to prevent it. His main advice is to not let someone bully you out of achieving your best work: ‘You can’t change the bully, but you can prevent yourself from being a victim.’

What Everyone Ought to Know About Genes and Spina Bifida

What Would You Do if Your Child Was Being Bullied at School?

How To Achieve Work-Life Balance in a Busy Corporate World

What Would You Do if Your Child Was Being Bullied at School?