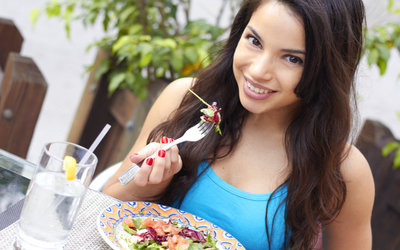 Taking care of your diet wellness is not without its challenges when you just stick to the confines of your own house, but you might as well say goodbye to your wellbeing once you start eating out. Between the supersizes and the high-calorie dishes, restaurants are often a factor involved in weight gain, even if you just eat out once or twice a week. According to Gayle Timmerman, PhD, a nursing professor at The University of Texas at Austin who studies eating patterns, ‘The restaurant is a high-risk food environment; there’s a pretty good chance if you eat out frequently you’re likely to gain weight over time.’ Luckily, Timmerman’s new study looks at how mindful eating can help you eat out, guilt-free.

The study, published in the Journal of Nutrition and Education Behaviour, included 35 middle-aged women who ate out at least three times per week and ranged in body size from slim to morbidly obese. These women were divvied up into a control group, and another group that followed a mindful eating programme. This involved a series of dining techniques that focused on close attention to the enjoyment of eating and feelings of hunger and fullness. Even though the women in the mindfulness group didn’t change their eating out or ordering in habits – and were doing so nearly six times a week, on average – they’d lost an average of 3.75 pounds and were eating about 300 fewer calories per day.

However, the mindful eating benefits didn’t just apply to dinners out or takeaways; these habits also translated into healthier home behaviours. ‘Once you’ve learned mindful eating skills, you tend to use them whether you are eating at your own kitchen table or at a five-star restaurant,’ comments Susan Albers, Psy.D., a psychologist at the Cleveland Clinic and the author of Eating Mindfully. ‘In general, we’ve lost the art of savouring food. We can eat an entire plate of food and not taste one bite. Mindful eating skills teach you how to eat less but enjoy it more.’ She adds that mindful eating involves ‘breaking those autopilot habits that we have around eating.’ So, how do you do it?

1. Think again before you order: When you go to the same restaurants all the time, you can end up falling into a rut of ordering the same dishes. You can also say yes without thinking when a waiter suggests an appetiser, so try to approach each dinner out with new eyes and ears.

2. Make each calorie count: What do you really love to eat? Wouldn’t you rather save your calorie budget and spend it on an eating experience that’s worth it? Timmerman asks, ‘Does that cheese on the burger really make it for you? If not, that’s about a hundred calories.’

3. Get saucy on the side: Whatever you can say “on the side” to – gravy, salad dressing, butter — do it. ‘Then you have control of how much…you really need or want on there,’ notes Timmerman.

4. Think about a doggy bag before you eat: When the plate appears in front of you, don’t tuck in straightaway without thinking. Take a moment and ask yourself how hungry you are on a scale of one to 10, and how that number relates to the food on your plate. If you’re only a “six” on the scale of one to ravenous, work out how much of your dinner will fill that gap, and plan to take the rest home in a doggy bag.

5. Really pay attention: Timmerman urges, ‘When you’re eating, really be aware of…the sight and the texture and the taste of food. We go out to eat because it’s enjoyable, it’s pleasurable, it tastes good—all of that. If you’re really paying attention, maybe you don’t have to eat the whole basket of fries; you can eat just a handful.’

What is Financial Therapy and How Does it Help You?

How to Eat Out and Still Make Healthy Choices

Do You Have to Avoid Takeaways in Order to Be Healthy?

A Guide to Heart-Healthy Restaurant Dining

How to Eat Out and Still Make Healthy Choices

Do You Have to Avoid Takeaways in Order to Be Healthy?